(A weekly digest from the internet on chemical and biological warfare issues. Emphasis is on incidents and perspectives, but inclusion of an item does not equal endorsement or agreement with the contents. This issue covers items collected between 24 – 30 April 2017.)

Perpetrator of second largest chemical attack in Syria identified (Orient Net, 5 April 2017): Observatories operating in the provinces of Hama and Idlib revealed the identity of the commander of the aircraft that carried out the massacre on Khan Sheikhoun in Idlib countryside, which marked the second largest chemical attack in Syria after the August 2013 attacks on both eastern and western Ghoutas in Damascus. Evidence Contradicts Russia’s Account of the Syria Chemical Attack (Jeffrey Marcus, 5 April 2017): The Russian government has sharply contested accounts by international leaders and witnesses that a deadly chemical attack in northern Syria last week was carried out by Syrian government forces. Here’s what the available evidence, including a declassified four-page American intelligence report, tells us about the reliability of the Russian account.

Commemoration of the 20th Anniversary of the Entry into Force of the Chemical Weapons Convention (The Hague, 26 April 2017) 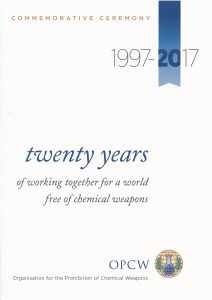 Invitation to the Commemoration 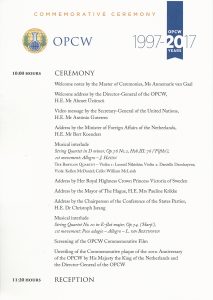 (A weekly digest from the internet on chemical and biological warfare issues. Emphasis is on incidents and perspectives, but inclusion of an item does not equal endorsement or agreement with the contents. This issue covers items collected between 17 – 23 April 2017.)

Did Iran just violate the Chemical Weapons Convention? (Majid Rafizadeh, 10 April 2017): Both Iran and Syria are signatories of the international treaty, the Chemical Weapons Convention. International attention has been directed toward the Syrian government for the use of chemical weapons against innocent people. Nevertheless, the critical role that Assad’s staunchest ally and bedfellow, the Islamic Republic of Iran, has played in these attacks should not be overlooked. Did Russia know of Syria chemical attack in advance? U.S. officials want to know (Matthew Schofield, 11 April 2017): White House officials on Tuesday said they have strong suspicions that even as Syrian jets lifted off with ghastly Sarin-loaded bombs, Russia was aware of the horror about to be dropped on the town of Khan Sheikhoun. Senior White House officials, who conducted a briefing on the attack on the condition of anonymity, described “with a high level of confidence” that Syrian warplanes dropped “at least one munition” loaded with Sarin that ended up killing about 86 people in the Syrian town April 4. They insisted that Russia and Syria had been running a disinformation campaign to create doubt internationally about the attack. What we know about the April 4 chemical attack in Syria (Dino Pisaniello, 11 April 2017): The April 4, 2017 chemical attack on the rebel-held town of Khan Sheikhoun in Syria led to at least 70 deaths and more than 100 people requiring medical attention, prompting an outcry from the international community. It led to the April 7 US bombing of the Shayrat air base. It is alleged that sarin was used in the Khan Sheikhoun attack. This particular chemical became famous in 1995 with the Tokyo subway attack, launched by members of the cult movement Aum Shinrikyo.

On 2 April I described how non-payments by states parties were defunding the implementation of the Biological and Toxin Weapons Convention (BTWC) and risking to shut down the 3-person Implementation Support Unit (ISU) and the convening of meetings. A couple of weeks earlier the Ambassadors of the three Depository States – the Russian Federation, United Kingdom and United States – had written an urgent letter to the BTWC States Parties to immediately comply with their financial obligations.

Since then, the situation has ameliorated somewhat. The contracts of the ISU staff have now been extended until the end of the year. But the crisis is far from over. When I wrote my blog posting, the deficit for the BTWC stood at US$ 379,557. According to the latest update on the financial situation (31 March) this figure has been reduced to US$ 188,631. read more

(A weekly digest from the internet on chemical and biological warfare issues. Emphasis is on incidents and perspectives, but inclusion of an item does not equal endorsement or agreement with the contents. This issue covers items collected between 10 – 16 April 2017.)

The Aftermath of an Alleged Chemical Weapon Attack in Idlib (Alexandra Bradford, 5 April 2017): Dr. Abdel Hay Tennari, who treated at least 22 critical victims from the alleged toxic gas attack in Khan Sheikhoun, said his patients’ symptoms were consistent with Sarin gas and the field hospital where he works has run out of the antidote. Syrian village hit by suspected chlorine attack hours after US condemns Assad (MEE staff, 6 April 2017): The Syrian government has been accused of carrying out a chlorine attack in Syria, hours after the US had condemned a chemical attack in southern Idlib that killed scores. Video footage shared on social media showed what appeared to be Syrian government helicopters dropping barrels filled with chlorine on the village of al-Lataminah in northern Hama. Russia must explain possible role in chemical attack, top Trump adviser says (Mike DeBonis, 9 April 2017): President Trump’s top national security adviser said Sunday that Russia should be pressed on whether it knew the Syrian regime would carry out a deadly chemical attack against civilians in a rebel-held area last week.

(A weekly digest from the internet on chemical and biological warfare issues. Emphasis is on incidents and perspectives, but inclusion of an item does not equal endorsement or agreement with the contents. This issue covers items collected between 3 – 9 April 2017.)

‘Toxic gas attack’ in Syria kills at least 58 people (Al Jazeera, 04 Apr 2017): Opposition says government or Russian jets pounded the town of Khan Sheikhoun in rebel-held Idlib. At least 58 people, including nine children, were killed in an air raid that released “toxic gas” on the rebel-held Syrian town of Khan Sheikhoun on Tuesday, a monitor said. Syria Conflict: ‘Chemical Attack’ Kills 58 People in Rebel-Held Town (Jack Moore, 04 Apr 2017): A suspected chlorine gas attack on a rebel-held town in Syria killed at least 58 people in the northwestern province of Idlib on Tuesday, according to a monitoring group. The attack took place in the rebel-held town of Khan Sheikhoun in Idlib province. Syria: suspected chemical attack kills dozens in Idlib province (Kareem Shaheen, 4 April 2017): Dozens of people have been killed in a suspected chemical attack in northern Syria, aid workers and local activists have said, in one of the largest mass casualty incidents using a toxic gas in the six-year conflict.

The news just broke that the Trump administration launched cruise missiles against al Shayrat airfield in Syria in response to the chemical weapons attack in Khan Sheikhoun, Idlib Province on 4 April.

I then got the following message:

As usual with such religion-infused hate messages, the basic facts are all wrong and ignorance reigns supreme.

It is really sad that with so much intolerance concerning social relations, ethnicity and personal identity, the efforts at disarmament – a core tool in creating international stability, preventing the outbreak of war, or should that fail, escalation of the conflict – now too become the object of highly individualised hatred. read more

This posting brings together the most important documents circulating at this stage.

First, the minutes with the statements by UN Security Council (UNSC) members and debate on 28 February, during which a resolution to sanction certain Syrian individuals deemed responsible for the earlier CW attacks was vetoed, can be downloaded here.

On 5 April, the UNSC held an emergency debate after the chemical weapon attack against Khan Sheikhoun, Idlib Province, Syria that killed scores of civilians – the death toll is now approaching 100 – and hundreds of other casualties. read more

It was a remarkable act. On 21 March the Permanent Representatives to the UN Conference of Disarmament of the three co-depositories of the Biological and Toxin Weapons Convention (BTWC)—the Russian Federation, United Kingdom and United States—wrote to their colleagues in Geneva to address the question of ‘assessed financial contributions to the Convention’. The matter is extremely urgent:

We have been informed that the funding currently available will only allow the [Implementation Support Unit – ISU] staff to have their contracts extended until end of April 2017. We, therefore, urge all States Parties to the Convention to pay their assessed contributions as soon as possible and to settle their arrears without delay. Without the prompt resolution of this issue, the structures and decisions agreed upon just a few months ago at the Eighth Review Conference will be in serious jeopardy. read more

(A weekly digest from the internet on chemical and biological warfare issues. Emphasis is on incidents and perspectives, but inclusion of an item does not equal endorsement or agreement with the contents. This issue covers items collected between 27 March – 2 April 2017.)