de Mussi and the Siege of Caffa: Origin of a Biological Warfare Allegation

The plague pandemic that hit central and western Asia, the Mediterranean societies and western and northern Europe in the middle of the 14th century features in all present-day historical narratives of chemical and biological warfare. To many writers those events underscore the potential of massive destruction in terms of both human and economic losses to societies. They also tend to ascribe the pandemic’s origin to a specific deed, namely the catapulting of diseased bodies into the Crimean town of Caffa by Mongol besiegers in 1346. Fleeing citizens carried what became known as the ‘Black Death’ to Mediterranean ports from where it spread throughout continental Europe and North Africa. The pandemic may have killed up to two-thirds of the European population.

Reconstruction of circumstances surrounding this allegation of historical biological warfare is challenging. For instance, was the medieval pandemic caused by the plague, and if not, what are the implications for the narrative of biological warfare? In the final years of the 20th century some authors began questioning whether ‘plague’ in the sense of the disease caused by the Yersinia pestis bacterium was responsible for the medieval pandemic and subsequent outbreaks. The scepticism was not new: several 18th and 19th-century writers had already noted divergencies in descriptions of symptoms as recorded in different places or times. However, it faded with the discovery of the causative bacterium and the roles played by rats and fleas in the plague ecology and transmission. This breakup of the early 20th-century consensus pitted academics from multiple disciplines against each other for more than a decade. Advancements in molecular biology, genome studies and paleobiology combined with new approaches to studying contemporary records and narratives opened a possible path towards a new consensus. Yet, fresh findings in the late 2010s, such as strong pointers to an extinct strain of Yersinia pestis in an old southern French reservoir, may once more challenge accepted and emerging narratives of the medieval plague. Notwithstanding, all new evidence in these debates invites reconsideration of the Black Death’s biological warfare origins. It increasingly appears likely that a fast-spreading pestilence overtook Caffa and its environs.

While the new insights may have mooted the biological warfare question, writers broadly referencing the history of biological weapon use are given to mentioning the Caffa siege in passing. This comes because the contextual factors of the siege of Caffa, the tactics deployed by the Mongols and the city defenders, or the military hardware in the field have not been subjected to the same level of scrutiny as the biological origins of the pandemic. Mark Wheelis, a professor in microbiology, seems to have written the final consolidative view on events in the Late Middle Ages in 2002. Considering the scientific debate on the plague’s origins, he concluded that ‘the claim that biological warfare was used at Caffa is plausible and provides the best explanation of the entry of plague into the city. This theory is consistent with the technology of the times and with contemporary notions of disease causation; however, the entry of plague into Europe from the Crimea likely occurred independent of this event’. In an earlier chapter on biological warfare before the First World War, he described in more detail other incidents involving the projection of human bodies and animal carcasses over fortifications during medieval and early modern age sieges in Europe, thereby lending additional credence to the overall Caffa narrative while being critical of certain specific claims.

This first issue of Historical Notes explores the origin of the biological warfare allegation involving plague-infested corpses catapulted over the walls of Caffa. The working paper forms part of a chapter on chemical and biological warfare from the Middle Ages until the end of the 18th century in a broader ongoing historical study. 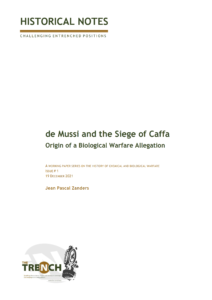 The Historical Notes working paper series contains passages from an ongoing, wide-ranging research project into the history of chemical and biological warfare whose story starts out with the question when our ancestors began manipulating poison. The research project focusses less on the discussion of individual incidents than on identifying and characterising social, cultural, political and scientific trends that helped to shape narratives of chemical and biological use through human and civilisational evolution. It also aims to critically review our present-day (re-)construction and understanding of past events.