[This new publication by the Implementation Support Unit of the Biological Weapons Convention and UN Office for Disarmament Affairs was presented on 8 April to delegates participating in the Preparatory Committee meeting in Geneva ahead of the Review Conference later in the year. The text below is from the preface.]

Article VII is arguably one of the least detailed provisions in the Biological Weapons Convention (BWC). It comprises a single sentence:

Each State Party to this Convention undertakes to provide or support assistance, in accordance with the United Nations Charter, to any Party to the Convention which so requests, if the Security Council decides that such Party has been exposed to danger as a result of violation of the Convention. 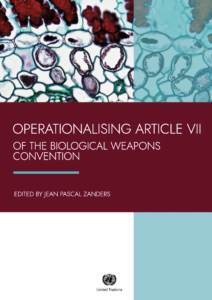 Its clauses do not fit well together. The reference to the UN Security Council (UNSC) has its roots in the original draft Convention proposed by the United Kingdom in 1969 that outlined specific responsibilities and obligations for the body. Today, it makes little sense to wait for a decision in New York to authorise emergency assistance. Fortunately, States Parties have already clarified that ‘assistance’ as meant in the article is not military, but humanitarian. They have also agreed that humanitarian assistance may be provided before any such UNSC decision. Article VII also circumscribes the context for an assistance request, namely exposure to a danger that is the consequence of a breach of the Convention.

Over the past decade, States Parties have adopted an issue-oriented approach to Article VII: ways of organising assistance and assistance requests (e.g. the assistance database proposed by France and India), specific assistance proposals (e.g. mobile biomedical units suggested by Russia), or a procedure for requesting assistance (e.g. the evolving proposal for triggering Article VII put forward by South Africa).

However, when taking a more process-oriented approach, different issues arise. First, if a deliberate disease outbreak is sufficiently severe, then national, regional or international responses will likely already have been mobilised before the first indications of deliberate origin emerge. This interval between first indications of the outbreak and realisation that something may be amiss may range from several weeks to months. The questions to consider are therefore:

Thinking in terms of a process, BWC States Parties might wish to consider preparedness. How does one put capacities in place to prevent or deal with potential deliberate outbreaks? Many concrete projects or programmes can be set up but may involve other BWC articles. Material assistance, infrastructure and training can and are already being supplied under Article X on international cooperation. The same goes for detection and analytical capacities, and so on. Specific biorisk management capacities could be provided under both Articles IV and X. In addition, States Parties could consider parallel legislation to authorise the transport and handling of samples across borders and protocols to maintain the integrity of the chain of custody. They could also already reflect on how collected data can be shared among partner organisations or with BWC States Parties. Many restrictions or conditions may apply, including ones in the Nagoya Protocol on Access to Genetic Resources and the Fair and Equitable Sharing of Benefits Arising from their Utilization to the Convention on Biological Diversity.[1]

The demand for solid evidential quality under an Article VII request will likely be high. There exists no laboratory network to support the BWC (like the one under development for the UN Secretary-General’s investigative mechanism or available to the Organisation for the Prohibition of Chemical Weapons). Findings of a highly qualified national reference laboratory in one BWC State Party may have to be validated by another, preferably international and neutral institution.

The BWC has no international body to oversee and promote such initiatives, so States Parties would have to decide on ways to organise and finance them. Given that under a global disarmament treaty all States Parties have equal obligations and enjoy equal rights, how can the community of States Parties ensure that everybody benefits from these preparations?

Second, the procedure for requesting emergency assistance requires urgent consideration. Submitting a request to the UNSC is the only course of action available under the BWC. Neither Article VII proper, nor subsequent common agreements offer any guidance. Three tabletop exercises organised by the BWC Implementation Support Unit between 2016 and 2019 revealed some hesitation to invoke the provision due to lack of clarity about the steps to take and the consequences these may entail. Participants were particularly concerned about the potential for conflict escalation if the article were to be invoked. The deliberate release of a pathogen indeed amounts to an act of war and represents a most egregious breach of the BWC. In addition, is it possible for the international community to prevent UNSC Permanent Members from wield their veto power when considering an Article VII request? And what role is left for the BWC States Parties once the UNSC has received the request? How does the crisis end? Do States Parties take over the helm from the UNSC once that body has declared an end to the crisis, even when the health emergency might not necessarily be completely over?

The BWC is a disarmament treaty, therefore an instrument of international security relating to weapons, their acquisition and retention, and their use. An outbreak or epidemic is most often a natural phenomenon, occasionally the consequence of an accident, and rarely the effect of a deliberate release to harm humans, animals or plants. Issues considered under Article VII overlap greatly with global health questions, as seen when States Parties considered the implications of the Ebola crisis in West Africa. Likely, they will also invoke the COVID-19 pandemic in their statements during the forthcoming Ninth Review Conference. Yet, the scope of the BWC is different; it is more limited.

When envisaging operationalisation of Article VII, the question arises how unique the considerations and proposals to the BWC are? Are States Parties considering or deciding on matters to be implemented by other organisations or institutions, or processes that fall outside of the BWC scope? Conversely, what decision-making structures exist under the BWC and what types of actions can BWC States Parties manage, control or oversee? Finally, what are the lateral consequences of concrete proposals States Parties will consider? Do they have implications for other parts of the BWC or would they benefit from additional agreements under other BWC articles?

The chapters in the present publication, prepared in preparation of the Ninth Review Conference of the BWC to be held in 2022, summarise the current state of reflection on the operationalisation of Article VII. They also highlight and discuss several issues States Parties will come across as they will try to further develop shared understandings and agreements on how to operationalise Article VII. The ideas and commentaries meant to stimulate understanding of issues and future reflection do not prejudge deliberations by States Parties and bind only the respective authors in their individual capacity.

The financial support by the Government of Japan in the preparation of the present publication is greatly appreciated.