Reflections of a negotiator on the BTWC Ad Hoc Group

The third issue of the Historical Notes series was prepared by Dr Robert (Bob) J. Mathews. From 1984 until 2017, he served as Scientific Adviser to Australian delegations during the negotiation and implementation of the Chemical Weapons Convention (CWC) and efforts to strengthen the Biological and Toxin Weapons Convention (BTWC).

In this third issue of Historical Notes, he reviews the efforts undertaken by the states parties to the BTWC to equip the convention with verification tools and set up an international organisation to oversee its implementation. As soon as the treaty negotiations came to a close in September 1971, several states regretted the absence of verification. Thus started a still ongoing endeavour to strengthen the BTWC.

As Bob Mathews writes in the introduction, in the optimistic days following the conclusion of the negotiation of the CWC in 1992, the CWC was seen as something of a case study for future approaches to arms control and disarmament. After the BTWC, the CWC was the second multilateral treaty designed to destroy an entire class of weapons, but the first to include a comprehensive verification system. Together with the euphoria following the end of the Cold War, this success generated a sense of optimism about concluding new arms control treaties and improving existing treaties.

Thus, many within the disarmament community felt that the time was right to negotiate a legally binding instrument that would strengthen the BTWC, agreed twenty years earlier with no verification measures. They intended to use the CWC verification provisions as a ‘blueprint’ for a verification mechanism to be included in a broader legally binding protocol to the BTWC. This negotiation process commenced with the Ad Hoc Group of Governmental Experts to Identify and Examine Verification Measures from a Scientific and Technical Standpoint (VEREX). Following the 1994 Special Conference, states parties established an Ad Hoc Group (AHG) to negotiate a legally binding protocol to the BTWC.

When the AHG began its work in January 1995, some negotiators were sufficiently optimistic to consider that they might conclude the protocol prior to the Fourth BTWC Review Conference, scheduled for late 1996. Notwithstanding, more than 6 years later, in August 2001, the AHG negotiations had come to a grinding halt without an agreed protocol. And subsequent efforts by some BTWC states parties to recommence negotiations, including during the Seventh Review Conference in 2011, have also failed to succeed.

The big question today is whether the Ninth Review Conference starting in November will end with some new initiatives that could lead to a future protocol or some less ambitious procedures to strengthen the convention. 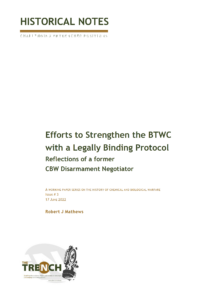