The Mongol siege of Caffa in 1346 is closely associated with the spread of the plague epidemic to continental Europe and northern Africa. A major Genoese trading post in the Crimea, its citizens escaped via the Black Sea and the Bosporus, eventually bringing the Black Death to Mediterranean ports from where it spread inland or onward to coastal cities in west and north Europe, eventually reaching even Iceland. Bad as the medieval pandemic was, its transfer to the Mediterranean basin some authors have attributed to an act of warfare: the catapulting of plague-ridden corpses into Caffa.

If historically correct, the deed would amount to one of the first cases of biological weapon use. Its consequences would have been huge: up to a third of the European population may have perished in the pandemic. Until today, no contemporaneous eyewitness accounts of events inside Caffa have surfaced. A narrative written in 1348 by the Genoese notary Gabriele de Mussi was discovered in the university library of Breslau in 1842. It described how the Mongol besiegers disposed of diseased bodies by hurtling them with catapults over the city wall and the population fled to Italy. Although originally thought that de Mussi was among the escapees, it was later established that he had not left his hometown of Piacenza near Genoa, where he witnessed the arrival of the plague in Italy.

In the early 20th century the emerging branch of military history picked up on the possible role of Mongol artillery in the pandemic. As de Mussi remained the only source, authors established the plausibility of the allegation by focussing on three areas, namely the availability of the military technology capable of launching cadavers over city walls, the commonality of catapulting cadavers in medieval siege warfare, and the geography surrounding Caffa that precluded the natural introduction of the plague into the city by rats. Although those researchers initially assumed de Mussi’s presence in the Crimean trading post, later they determined that his location did not materially affect their focus of interest, namely the claim of early biological warfare. However, establishing the plausibility of certain circumstances that might have enabled a certain event to take place still does not prove that the event happened.

How common the practice of catapulting corpses?

The first Historical Notes looked at de Mussi’s chronicle and investigated its relevancy to the historical debate into the origins of the Black Death, on the one hand, and the emergence of the biological warfare allegation, on the other hand. This second issue looks deeper into the claim that the catapulting of human or animal corpses was a fairly common practice in medieval warfare aiming to provoke disease outbreaks in besieged castles or cities. European, Muslim and Asian literary sources mention the use of body parts and cadavers as artillery projectiles without suggesting that it ever became conventionalised as a method of combat. Passages may point to a singular incident or describe a small barrage. Overall, the sparsity of references suggests a rare practice.

The opportunity to project body parts or whole cadavers depended on then available weapon technology. Two types of trebuchet are central to the present discussion, namely the mangonel or traction trebuchet using rope pullers, and the counterweight trebuchet relying on gravity for dropping the counterpoise. All descriptions of hurtling body parts before the 14th century concern heads of decapitated individuals. This is essentially an expected situation because of the limited throw weight of mangonels. With one exception, no narrative suggesting the projecting of complete corpses precedes the start of the Hundred Years’ War in 1337. By then, counterweight trebuchets were attaining their maximal destructive power.

This second issue of Historical Notes explores the origin of the biological warfare allegation involving plague-infested corpses catapulted over the walls of Caffa. The working paper forms part of a chapter on chemical and biological warfare from the Middle Ages until the end of the 18th century in a broader ongoing historical study. 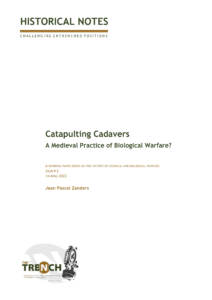