The fourth issue of the Historical Notes series was prepared by Dr Gabriele Kraatz-Wadsack. She was a weapons inspector with the UN Special Commission (UNSCOM) in Iraq, later Chief of the Weapons of Mass Destruction Branch – UN Office for Disarmament Affairs. She also served in the German Armed Forces and the Federal Foreign Office.

In this fourth issue of Historical Notes, she describes the only instance of international monitoring in the biological weapons (BW) area. It draws on her first-hand experience to launch and manage biological ongoing monitoring in Iraq from 1995 through 1998 both within the country and from UNSCOM Headquarters.

Following Iraq’s defeat after its aggression against Kuwait, the UN Security Council (UNSC) adopted resolutions 687 (1991) and 715 (1991). They foresaw verification activities based on two pillars: disarmament validation and ongoing monitoring. Disarmament validation sought to verify that all prohibited weapons, items, materials and facilities in Iraq were destroyed or rendered harmless. The second pillar consisted of establishing and operating ongoing monitoring and verification (OMV) to continuously ascertain that Iraq did not divert non-proscribed assets to reconstitute or start prohibited activities.

Iraq was actively hiding its BW programme. The Iraqi leader, Saddam Hussein, apparently considered those weapons as the most advanced and valuable military assets. In November 1990, in the midst of the Kuwait crisis, he had boasted to his advisers that ‘only few in the world come to our level as far as the chemical and germ weapons superiority, maybe two, one or maybe none as far as quantity and quality’. The absolute cover-up of Iraqi BW production and weaponization continued until UNSCOM confronted Iraq in early 1995 with irrefutable evidence of concealed BW activities.

For biological monitoring to be both comprehensive and properly focused, it was essential to establish if such BW activities had existed and if so, to understand their full extent. This included the sites and facilities involved, the human and material resources deployed, and Iraq’s know-how and technical achievements. UNSCOM needed this knowledge to ensure that it would properly apply the monitoring tools and that OMV would appropriately cover all dual-use facilities, activities, technologies, items and materials.

Activities carried out under biological monitoring helped to expose Iraq’s past BW activities, which included the production and deployment of operational biological weapons. The monitoring team uncovered critical information about some proscribed equipment and materials that Iraq had tried to disguise under supposedly civilian activities at the sites under monitoring. For example, Iraq had imported 42 metric tonnes of growth media prior to 1991. The monitoring team found and identified an unused amount of 22 tonnes still at several sites under biological monitoring. Iraq claimed that hospitals had consumed the ‘missing’ 20 tonnes for diagnostic purposes. Inspectors dismissed the explanation because the types and amounts of imported growth media were not suitable for diagnostic purposes in Iraqi hospitals. Instead, the imported and consumed volumes pointed to fairly large biological production at industrial-scale facilities. Specific design features of equipment at the Al Hakam facility contradicted Iraq’s declared purpose of single-cell protein production for animal feed. The former Head of the Iraqi BW programme, Nasir Hindawi revealed in an interview with CNN in 2003 that he was told to say that the Al Hakam plant was used only for peaceful purposes. However, according to him ‘the inspectors were not fooled’. Iraq admitted in July 1995 that Al Hakam had been established and used solely for biological warfare agent production and weaponisation. The biological monitoring team was able to specifically identify the equipment used for BW production at Al Hakam and another site, the Foot and Mouth Disease Vaccine production facility at Daura.

UNSCOM continued its two-track activities in biological disarmament and monitoring until December 1998 when it was withdrawn from Iraq. In December 1999, the UNSC replaced UNSCOM with the UN Monitoring, Verification and Inspection Commission (UNMOVIC) and mandated it to specifically focus on reinforced monitoring and verification. UNMOVIC only began its field operations on 27 November 2002 and departed just over three months later on 18 March 2003.

In her conclusions, Kraatz-Wadsack writes that from 1995 to 1998, UNSCOM established and operated an effective biological monitoring system that deterred Iraq from restarting proscribed activities. Although it was the first one ever, UNSCOM succeeded in achieving the objectives of its monitoring mandate as no evidence has ever been uncovered of any prohibited biological activity in Iraq during the period of monitoring.

The monitoring and verification experience in Iraq illustrates that in-country verification, especially through on-site inspections could generate more timely and more accurate information than from any other source and could also serve as the strongest deterrent to proscribed activities. Unannounced on-site inspections by knowledgeable inspectors were the most powerful tool that was greatly reinforced by the deployment of resident teams inside Iraq. Such inspections credibly increased the probability of timely detection of proscribed activities at any site in Iraq. The success was ultimately due to the commitment, knowledge, skills and dedication of the people who carried out inspection and monitoring activities. 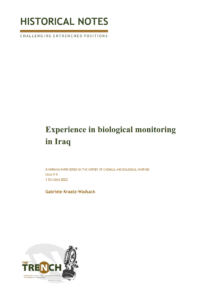