On 30 November, the Middle East Treaty Organisation (METO) – a coalition of civil society activists and practitioners – organised an informal virtual discussion round with Middle Eastern diplomats participating in the Second Session of the Conference on the Establishment of a Middle East Zone Free of Nuclear Weapons and Other Weapons of Mass Destruction under the auspices of the UN Office of Disarmament Affairs. That session should have taken place last year, but the COVID-19 pandemic forced postponement of in-person UN diplomatic gatherings. 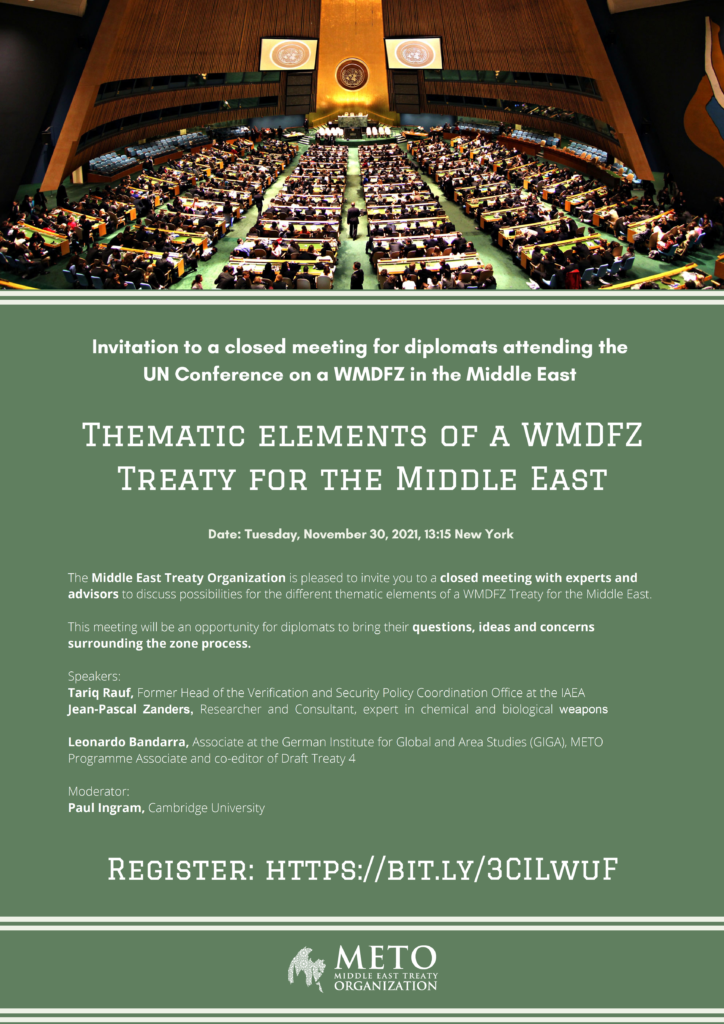 Last Tuesday’s informal discussion forms part of METO’s efforts to draft and promote a treaty for a Middle East zone free of non-conventional weaponry. Its work progresses via a rolling text with input from diplomats and government officials, former staff from relevant international organisations, academics and experts specialised in the different weapon categories, and other stakeholders. The document not only tries to construct a possible framework for a future regional treaty, but also helps to identify practical issues on different levels that the Conference may face and will have to address once concrete negotiations commence.

METO invited me to make some introductory remarks on chemical and biological weapon (CBW) disarmament and its verification dimension. Given it is always easy for outsiders like myself to outline intellectual constructs, highlight potential obstacles or list ought-to-dos, this time I gave attending diplomats seven sets of questions on how Conference participants (rather than us, outsiders) today identify initial problems the future treaty should address.

I already commented on the new process to disarm the Middle East in a four-part series starting in February 2020 and a two-part follow-on in March 2021. In this blog I list those seven sets of questions together with a short commentary why I consider them important for the next steps in the new process.

The four core treaties governing CBRN weapons – the Chemical Weapons Convention (CWC), the Biological and Toxin Weapons Convention (BTWC), the Nuclear Non-Proliferation Treaty (NPT) and the Treaty on the Prohibition of Nuclear Weapons (TPNW) – were constructed differently and place different types on demands on parties. The CWC and the BTWC are disarmament treaties. They require the total elimination (i.e. zero possession) of the respective weapon categories and also strive to prevent their future emergence and re-emergence. The NPT focusses on the non-transfer of technologies if these may contribute to acquiring nuclear weaponry. Except for the undertaking in Article VI to cease nuclear armaments competition and pursue nuclear disarmament, the NPT does not address nuclear weapon (NW) elimination. The TPNW aims for comprehensive disarmament but is less focussed on weapon technologies than on the humanitarian consequences of NW use and the human and environmental legacies of NW development and testing. No international treaty specifically addresses radiological weapons.

The different objectives of the treaties have a major bearing on how they each define the arms category they aim to regulate. Already in the late 1920s governments and experts recognised the need to define chemical weapons (CW) and bacteriological/biological weapons (BW) if they wished to outlaw them completely. The reason? They had to differentiate between legitimate civilian application of underlying technologies and their possible use for weapon development and production.

Given that non-proliferation is a policy tool to preserve the status quo in the distribution of weapon capacities among states, the NPT did not require an internationally accepted legal definition for NW. Because of the TPNW’s humanitarian and norm-setting focus, it is less concerned with questions relating to legitimate uses of technologies that might contribute to weapon development and acquisition. Negotiators therefore saw less need to invest in a complex process of defining NW from a legal perspective.

Underlying this question is the fundamental consideration and future decision whether the zone will rely on existing global treaties to pursue its objectives or whether the negotiators will invest in the design of a machinery tailored to specific regional needs?

The CWC has the most sophisticated verification system based on state party declarations. Part of that system is focussed on certifying weapon destruction (a national responsibility for CW possessors) under international supervision. The other part, aiming for the prevention of future emergence or re-emergence of CW, organises the routine verification of industries that meet certain treaty-specified requirements (which follow from the definition of a CW).

The BTWC, in contrast, lacks such a system. Through the process of review conferences, states parties have agreed on confidence-building measures, but these annual self-reporting exercises are politically, but not legally binding. Negotiation of a legally-binding protocol during the late 1990s that would have included verification elements failed in 2001. Resistance to any form of verification by a few states parties has precluded any progress on the question ever since. For the future Middle East zone, this raises the prospect of having to devise an autochthonous machinery.

The NPT and the TPNW rely both on the safeguards system by the International Atomic Energy Agency (IAEA), which, however, were not designed for overseeing NW destruction and certifying non-possession. The safeguards machinery can detect and allow the IAEA to respond to the diversion of fissile materials for purposes prohibited under the NPT and TPNW.

To answer this question negotiators will have to consider what measures the region will need to generate the necessary confidence in compliance.

An idea floating around suggests drawing on the verification systems run by the IAEA and the Organisation for the Prohibition of Chemical Weapons (OPCW). Its advantages are that capacities and resources would not have to be duplicated and the Zone could benefit from an already well-functioning machinery. The approach would parallel that of all but one Nuclear Weapon Free Zones (NWFZ), whose treaties did not found a regional organisation and rely on the IAEA’s safeguards process for verification.

However, the current Conference is not looking at just a NWFZ for the Middle East, but at a zone exempt from CBW too. In addition, participation in the Conference has been limited to the members of the League of Arab States plus Iran and Israel, signalling that in this regional disarmament effort the Middle Eastern states wish to take full ownership of the process.

A final point is that in case of reliance on global treaties, no verification machinery is available in the BTWC. For BW, the Zone would have to rely on its own devices (or have nothing).

If the negotiating partners were to decide on an autochthonous verification system, then the answer to his question is straightforward. With verification responsibilities such an organisation would require a technical secretariat besides standard political decision-making bodies.

The answer becomes less clear should the regional states opt for reliance on external treaties to achieve their objectives, especially about the need for a technical secretariat to support treaty implementation.

A technical secretariat, like in the OPCW or the IAEA, offers plenty of advantages for the long-term relevancy of the treaty, including

If regional states would opt to rely on support structures in other treaties, how would they establish lateral connections with those international organisations? What types of confidentiality arrangements must be put into place to authorise data exchanges supporting the objectives of the zone?

This question obviously implies that the Middle Eastern states would not simply rely on one or more of the existing treaties to achieve their regional disarmament objectives. The whole history of having a zone exempt of non-conventional weaponry has turned around nuclear weapons and is rooted in the NPT review conferences. There is a tendency by regional actors to consider CBW of lesser importance, even though especially CW have been used almost exclusively in the Middle East after the Second World War. Toxin agents and incapacitants (many of which comprise central nervous system-acting agents that lie in the grey zone between CW and BW) have also seen occasional application. The question therefore addresses the far more profound matter of an equivalent approach to the different weapon categories, especially as different parts of the Middle East may perceive threats posed by these weapons relative to each other differently.

There seem two basic options for a comprehensive treaty. The first option integrates all weapon categories into a single, comprehensive document. It may be the most difficult one to negotiate, but its comprehensiveness could eventually yield the greatest security and assurance rewards. Arguing against that option is that so far no disarmament or arms control treaty (one allowing parties to retain residual weapon capacities within specific numerical or qualitative parameters) has covered more than one discrete arms (sub)category. The reason – straightforward, but not so simple to explain – is that the factor creating the preconditions for successful weapon control is the role the arms play in the military doctrines of the different negotiating partners, rather than their technological characteristics. This goes a long way to explaining why BW got separated from CW in the late 1960s, for example. Or why the ambition of General and Complete Disarmament never really took off.

The second approach would resemble the Certain Conventional Weapons (CCW) Convention with its various protocols, in which the chapeau treaty presents the overall framework and separate protocols address specific issues of concern (including the one on incendiary weapons, such as white phosphorus). I haste to add that the CCW Convention belongs more to the laws of war or humanitarian law rather than weapon control, but the concept may add greater flexibility for the Middle East zone than the integrated alternative. First, the approach may allow for developing adequate and effective arrangements tailored to the specific challenges each weapon category poses to regional security. Second, specific (sub)committees high in expertise covering different dimensions could focus on a single arms category. Third, once the treaty has entered into force, parties could easily update their understandings, reach common agreements, or even amend provisions because of issues affecting a single arms class without opening the other treaty parts to review or (in the worst case) renegotiation as part of a compromise-building exercise. Modifications are good only if such understandings, agreements or amendments correspond with the overall principles in the chapeau treaty. This approach may be relevant in view scientific and technological developments affecting a single class of weaponry.

Negotiators will have to ensure that the articles in the chapeau treaty cover all the basic obligations in the global treaties because not all states in the Middle East are party to the BTWC, CWC, NPT or TPNW. Failing to do so would create unequal obligations under international law.

At the present stage of the Conference, a vision on the possible future structure of the treaty today would greatly influence the organisation of the negotiation process tomorrow.

This is a question more aimed at experts in the disciplines relevant to the security questions the Zone wishes to address, and stakeholders in industry and trade, academia and science, and civil society. The ‘threat’ concept is often vague or amorphous, linked to another county, culture or people, and frequently presented hyperbolically.

Developing a disarmament treaty requires a much finer discrimination in threat issues. These then need to be assessed of how they can be mitigated via an international legal instrument, bearing mind that threats evolve with contextual circumstances, scientific and technological developments, the emergence of new actor categories, and, indeed, with the success of the disarmament mechanism itself.

Experts and stakeholders can assess and help to identify threat issues and propose practical solutions to mitigate them, which may include proposals to optimise verification processes that reduce intrusiveness or interruption of activities.

Their input would be most relevant in the subcommittees considering the specific weapon categories.

The relationship between the Zone and the BTWC, CWC, NPT and TPNW comes up again under this question. Are there security concerns about the weapon categories not or insufficiently addressed under the global treaties that merit special consideration in the Zone treaty?

Answers to Question 6 would provide a preliminary idea of what these specific issues might be.