As I am writing, disturbing news reports are coming in of a major chemical attack on the eastern eastern outskirts of Damascus (Ghouta district). According to images and film footage posted to the Internet by opponents to the al-Assad regime, many casualties, including fatalities can be seen. Supplementary visual testimony strongly indicates poisoning.

[Images are graphic and should be viewed with caution!]

In past blog postings and commentaries I have been sceptical of CW claims, because the narrative accompanying images and film footage did not correspond with what could be seen. More importantly, a number of things one would expect to see after a CW attack were missing. Some stories as they appeared in the press just did not add up. (Recall how the initial reports on the March attack referred to chlorine, while today everybody seems to insist that it was sarin.) While there were indicators of exposure to toxicants, the evidence lacked density and there were many alternative plausible explanations for the symptoms. The United Kingdom, France, the United States and Russia supplied evidence (including analyses of samples taken out of Syria) to the United Nations in support of their request to investigate multiple allegations, but offered no concrete details to the public. Furthermore, as those samples had not been analysed in other than national laboratories and government representatives were referring to ‘their evidence’ to buttress arguments in support of military intervention or arming the insurgents, the spectre of the Iraq invasion ten years ago sufficed to retain a healthy dose of scepticism. 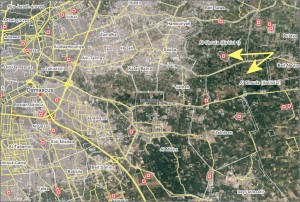 The footage from the current alleged attack(s) in the Ghouta district seems to offer more convincing evidence of poisoning through asphyxiation (witness the pinkish-bluish hue on the faces of some of the fatalities). Further elements that seem to confirm exposure to toxicants are the unfocussed and rolling eyes, severe breathing difficulties, in one instance a very erect penis, and possible signs of urination or defecation on trousers (although this is difficult to say, given that the hospital floor is covered with water as staff seems to hose water over every victim). None of the victims appeared to have external wounds from blast, shrapnel or bullets.

I am not sure whether the claims of nerve agent use accompanying the footage and images are correct. The people are not convulsing (except for one man shaking his legs while shouting out, but the remainder of his body does not suffer from involuntary contractions) and I have not seen anybody applying nerve agent antidotes. Nor do medical staff and other people appear to suffer from secondary exposure while carrying or treating victims.

It is clear that something terrible has happened. The scenes could not have been stage managed. However, it is extremely puzzling that government forces would launch a chemical attack precisely at the moment when UN inspectors are finally in the country to investigate some of the earlier allegations. The official news agency SANA has meanwhile denied the allegation.

So, the big question mark now is whether UN Secretary-General is going to use the authority of his office to demand that the UN inspection team that is already inside Syria investigate this new site of alleged attack. After all, this time around, the forensic, medical and other physical evidence would still be around and the team would be able to guarantee the integrity of the chain of custody of all evidence, something that was lacking in all previous claims.

Sure to be followed up.