Wednesday, 2 December, Innocence Slaughtered finally saw the light. At a lunch-time side event at the OPCW Headquarters during the Conference of the States Parties to the Chemical Weapons Convention in The Hague, the book got presented to an audience of some 40 people.

Ambassador Ahmet Üzümcü, Director-General of the OPCW, opened the proceedings, followed by Mr Jef Verschoore, Deputy-Mayor of Ieper and Chairperson of the In Flanders Fields museum, sponsor of the publication project.

One of the chapter authors, medical historian Dr Leo van Bergen reflected on the deeper meaning of the book’s title: Innocence Slaughtered. Mr Dominiek Dendooven, researcher at the In Flanders Fields museum, dwelt on one aspect of his chapter: German Gaspionier Willi Siebert’s recollections of the first chlorine attack, which he wrote down after the war to explain the horrors of real war to his son.

In the final presentation, I linked some of the book’s themes to today’s challenges in chemical disarmament, notably how rapid semantic evolution of core concepts reflect changing conceptions of technology, which in turn can challenge treaty regimes in force at a given time; how pessimism about humanitarian law in the early 1920s led an arms control subcommittee to propose that chemical warfare be legalised except for the use of chemical weapons against cities; and how the legal problems diplomats encountered during the debates on the 1925 Geneva Protocol eventually led to the framing of core concepts of today’s Chemical Weapons Convention. 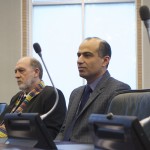 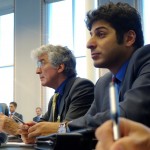 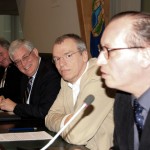 If something can go wrong … Indeed, Ryan Gearing of Uniform Press, the book’s publisher, was supposed to arrive  earlier in the morning with the very first copies of the book. A computer glitch kept the plane for over an hour on the tarmac. He luckily made it before the end of the book launch event, but alas, too late for me to give Ambassador Üzümcü a copy of the book.

Fortunately, the Chemical Weapon Convention Coalition – an international network of non-governmental organisations – had that same evening a reception planned for participants in the Conference of States Parties. It turned out to be another occasion to promote the book – as the Director-General aptly pointed out – ‘to an even larger audience’. There is a silver lining to any cloud.