How the Convergence of Science, Industry and Military Art Slaughtered Innocence 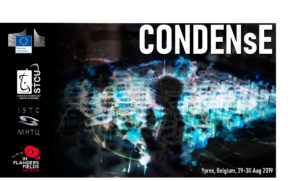 It is a real pleasure to be back in Ieper, Ypres, Ypern or as British Tommies in the trenches used to say over a century ago, Wipers. As the Last Post ceremony at the Menin Gate reminded us yesterday evening, this city suffered heavily during the First World War. Raised to the ground during four years of combat, including three major battles – the first one in the autumn of 1914, 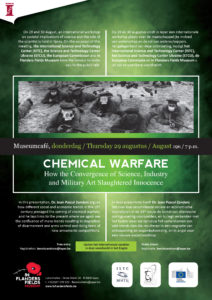 which halted the German advance along this stretch of the frontline and marked the beginning of trench warfare; the second one in the spring of 1915, which opened with the release of chlorine as a new weapon of warfare; and the third one starting in the summer of 1917 and lasting almost to the end of the year, which witnessed the first use of mustard agent, aptly named ‘Yperite’ by the French – Ypres was rebuilt and, as you have been able to see to, regain some of its past splendour. read more

Was Iran responsible for the CW atrocity in Halabja?

The question therefore arises whether the United States may have been politically motivated to place the main responsibility for Halabja with Iran. The allegation came as Washington was visibly tilting towards Iraq. Soon after the US State Department blamed Iran for the events, US officials were quoted as saying that the finding undermined the propaganda advantage Iran was seeking by publicising the attacks.[1]

From this angle, the US assertion might be viewed as an attempt to undermine the moral high ground regarding chemical warfare Iran desperately tried to maintain during the war. The statement, however, may also have been motivated by politics in the UN Security Council. Since the end of 1987 the United States had been unsuccessfully pressing for a resolution imposing an arms embargo against Iran for refusing a cease-fire. While the permanent members remained divided, an opportunity for unity on the issue presented itself just before the Halabja attack. With Iran in the clear position of the victim of Iraqi violations of international law, the chances for success evaporated fast. Blaming Iran for the attack could then conceivably have been a manoeuvre to save the resolution. read more

In the period of 16–18 March 1988 Halabja and its surroundings were attacked with chemical weapons (CW). According to Iranian figures, there were 12,500 casualties, including more than 5,500 fatalities.[1] A Kurdish researcher later concluded that at least 3200 residents are known to have died.[2] It is impossible to reconstruct exactly the events in and around Halabja. Nevertheless, it is widely accepted that the Iraqi military forces were solely responsible for the attack against a civilian target. Yet, shortly after the events sources in the United States began to hint that Iranian troops might have actually killed the majority of the civilians. The latter version assumes that the Iranians had not occupied Halabja and that the Kurdish inhabitants were killed by a chemical warfare agent that was never in the Iraqi arsenal.[3] Most significantly, it suggests that Iran had achieved an advanced stage of assimilation of CW into its military doctrine. read more

Two factors definitely contributed to the change in Iran’s views on chemical warfare: the systematic Iraqi attacks with CW from 1983 onwards and the lack of response from the international community for the Iraqi violations of international law. Iran’s chemical weapons (CW) armament programme started late into the war. Such a programme is complex and involves many phases, including research and development, setting up a production base, weaponisation, offensive and defensive doctrine development, establishment of logistics and operational support, training, and protection and defence. Consequently, Iran cannot be expected to have developed an advanced chemical warfare capability before the cease-fire in August 1988. Iraq, in contrast, is known to have embarked on a CW armament programme in the 1970s (although there are earlier indications[1]), but it still required several years of war fighting before it was able to integrate CW in its overall military operations and field a variety of agents. read more

In the 1980–88 Gulf War Iraq repeatedly attacked Iran with chemical weapons (CW). At the beginning of the war both countries were contracting parties to the Geneva Protocol. According to Iranian statements, the first Iraqi CW attack occurred in January 1981.[1]  One of the first independent news reports appeared in August 1982.[2] Iraq gradually integrated CW into its defensive and offensive military operations.

Initially Iran appears to have been totally unprepared for military operations in a chemical environment. Throughout the war Iranian troops remained poorly protected and, in the light of the missile war against cities, the country would have been unable to protect its civilian population from Iraqi missiles armed with chemical warheads. Although CW accounted for only a small proportion of Iranian battle casualties, the threat and the inability to retaliate in kind against Iraqi population centres contributed to the demoralisation of the Iranian leadership, military personnel and civilians. read more

Allegations that Iran is a chemical weapon (CW) proliferator originated in part with claims that it had used CW during the 1980–88 Iran–Iraq war. Iraq was the principal user of CW during the war. According to Iranian accounts, the first chemical attacks began in January 1981, but independent reports were not published until one and a half years later. Iraqi chemical attacks definitely escalated during the second half of 1983, which eventually led to the first of several investigatory missions organised by UN Secretary-General Javier Pérez de Cuellar in March 1984. Despite the overwhelming evidence of chemical warfare, confirmed by the UN missions, the international community represented by the UN Security Council chose not to brand Iraq as the violator of the 1925 Geneva Protocol prohibiting the use of chemical and biological weapons in armed conflict. Instead, it repeatedly called upon both belligerents to respect the protocol and only accused Iraq by name of waging chemical warfare in the final stages of the conflict. Iran—internationally isolated because of its inflammatory rhetoric, subversion of governments in the Middle East, and the hostage taking of US embassy personnel following the 1979 Islamic Revolution—meanwhile felt increasingly frustrated by the lack of will to uphold international law and threatened to resort to CW in retaliation. read more

Whether Iran launched chemical weapon (CW) attacks against Iraq during the 1980-88 Gulf War has been the subject of a long-lasting controversy. Iraq was responsible for initiating chemical warfare in the early 1980s in blatant violation of the 1925 Geneva Protocol prohibiting CW use in war (since then, more broadly termed ‘armed conflict’). Negotiations for the Chemical Weapons Convention were ongoing and would not be concluded until September 1992. Nothing in the Geneva Protocol prevented Iran from developing, producing and stockpiling CW. Little stood in its way to retaliate in kind. read more 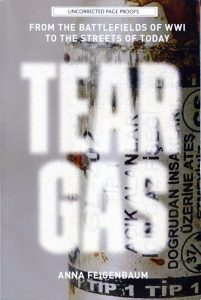 Anna Feigenbaum is an academic at the Centre for the Study of Journalism, Culture and Community, Bournemouth University. Her interest lies in data storytelling, an approach that benefits from increasing access to data to build a more complex narrative in support of social change. That narrative is furthermore interwoven with practitioners’ experience and empirical research. Her just published book Tear Gas: From the Battlefields of WW1 to the Streets of Today uses this approach to explain how a chemical warfare agent first used over a century ago has become a common weapon in the arsenals of police forces worldwide. read more

This posting brings together the most important documents circulating at this stage.

First, the minutes with the statements by UN Security Council (UNSC) members and debate on 28 February, during which a resolution to sanction certain Syrian individuals deemed responsible for the earlier CW attacks was vetoed, can be downloaded here.

On 5 April, the UNSC held an emergency debate after the chemical weapon attack against Khan Sheikhoun, Idlib Province, Syria that killed scores of civilians – the death toll is now approaching 100 – and hundreds of other casualties. read more

Last September Amnesty International (AI) issued a 105-page report entitled Scorched Earth, Poisoned Air alleging the use of chemical weapons (CW) among other atrocities committed by Sudanese forces in the Darfur region. The chemical warfare section contains numerous images of civilian victims with horrifying skin lesions. It suggests that these are the consequence of exposure to a vesicant, possibly a mustard agent. The report is accompanied by a 4-minute video on YouTube. Several press articles and contributions to on-line media after the report’s publication have reinforced the allegation of mustard agent use. read more